A new scientific paper shows the decline of butterflies

Dr Martin Warren of Butterfly Conservation Europe summarises the results of a new paper published by the Natural Academy of Sciences in the USA. 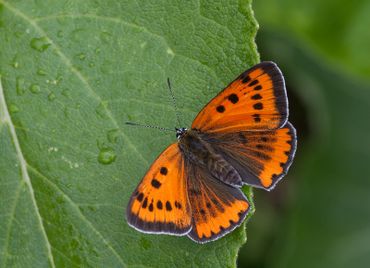 There is mounting evidence from scientists across the world that insects are declining at an alarming rate, suggesting that they are facing a severe crisis. This matters because insects are vital to the functioning of ecosystems and are important pollinators of wildflowers and many crops. Some have even called the crisis and an impending insect Armageddon.

But what is the evidence for this mounting crisis? The data on insect population levels around the world is very patchy and comparatively few insect groups have been studied in detail. Those that have been studied cover small regions, mainly in Europe, while the tropics, the most diverse regions, are hardly covered at all, or only for short periods. An overview of the evidence has just been published in a special issue of the American journal Proceedings of the Natural Academy of Sciences (PNAS, their equivalent to the Royal Society in the UK).

The issue contains two review papers covering the situation concerning butterflies and moths, the first by me and several co-authors (including Dr Nigel Bourn, Dr Dan Hoare and Dr Sam Ellis of Butterfly Conservation) covering butterflies in Europe, and the second led by David Wagner of the University of Connecticut and co-authored by Butterfly Conservation’s Associate Director of Recording and Research Dr Richard Fox covering moths. Trends in global moth populations have been found to be complex and diverse and the paper suggests deforestation, agricultural intensification, and climate change, particularly with regard to extreme weather events, plus other local factors, to all be playing a part.

The situation in mid-west Europe

A study in the Netherlands has found that butterflies have been decreasing for a long time. By looking at historical records, they found that butterfly distributions dropped by 80% in the fifty years between 1890 and 1940. Our modern monitoring schemes are thus picking up just the tail end of a very long period of decline. If we had data going back 200 years, losses would be even more worrying. But this general pattern of loss is complicated by the fact that many butterflies have expanded their ranges substantially in recent decades because of climate change. In the UK, around 30% of species have expanded their range while in the Netherlands and Flanders around half of all species are increasing in numbers. In the UK, just one species has colonised (the Red Admiral, which is now considered to be a resident rather than migrant), but in the Netherlands and Belgium (where there is no barrier like the English Channel) several species have colonised as they have spread north through Europe, including the Southern Small White, Short-tailed Blue and Marbled Fritillary. 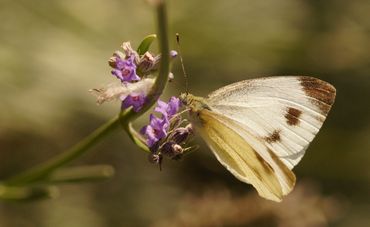 Other parts of Europe

Monitoring schemes are now being developed in other countries but the runs of data are still quite short, so we have to rely on other sources of information. Red Lists of threatened butterflies are available for most European countries and show that the proportion of threatened species is highest in the mid-western and central Europe, including countries like the Czech Republic and Germany as well as the Netherlands, Belgium and Denmark. It then decreases more or less concentrically toward southern and eastern Europe, and towards the Mediterranean region (e.g. Spain, France, and Italy). It is tempting to assume that the latter countries have not experienced such a severe decline of butterflies, but this may be masked to some extent by a lack of accurate trend data. Most of them had no comprehensive monitoring data until very recently. A major role of Butterfly Conservation Europe is to expand the monitoring network so that we have better data in future (https://butterfly-monitoring.net/).

The main causes of butterfly declines are well-known and include habitat destruction, changing management (including grassland abandonment and lack of woodland management), and chemical pollution in the form of pesticides and herbicides. Added to these are more recent threats, such as nitrogen deposition and climate change. The latter has a complicated effect on butterflies that we are only just beginning to tease apart. Some species clearly benefit if their habitats are still widespread and they can colonise new areas, but many others are suffering because of extreme weather effects (such as droughts or floods), or because their microclimates are changing. Some of the effects are counter-intuitive. It would be logical to suppose that the majority of butterflies, which prefer warm conditions, would benefit from a warming climate. But a study on the Wall shows that climate warming has actually leads to a cooling of its breeding habitats due to increased grass growth. The same is possibly true of the High Brown Fritillary in the UK where its dry breeding habitats amongst bracken litter are getting smothered and made cooler by tall grasses. 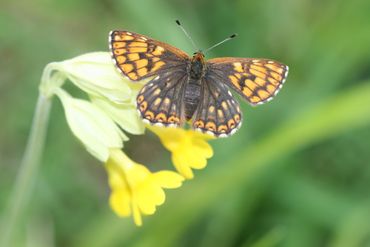 Against this backdrop of declines, it would be easy to fall into despair. But the paper describes examples of positive conservation in each of the focal countries. In the UK, Butterfly Conservation is leading the way with a comprehensive landscape-scale conservation programme (https://butterfly-conservation.org/sites/default/files/2018-11/bc_2025_conservation_strategy.pdf).

One example is the Duke of Burgundy, a species that breeds mainly on cowslips in lightly grazed grassland. It is one of the UK’s most threatened species and more than 60% of its colonies became extinct between the 1980s and its nadir in 2012. Concerted efforts to reverse its decline began in 2003 with a programme of landscape-scale conservation. This comprised mainly of targeted emergency recovery management, with the rotational management of scrub and the fencing of sites to reduce grazing pressure. A good example is in the North Downs of Kent where the butterfly was on the brink of extinction, having been reduced to just three colonies. Since 2012, Butterfly Conservation has run two extensive landscape-scale projects with the help of several funders, and many local landowners and conservation partners. As a result, the average peak count of Dukes per colony has increased almost three-fold from 28 in 1995-2007 to 83 in 2008-2017. As numbers have increased, the butterfly has been able to spread naturally and the number of colonies has increased from just 3 to 14 in 2016. BC’s landscape-scale conservation approach also seems to be having an impact on the butterfly’s abundance in the whole of the UK, where numbers have increased by 90% in the ten years from 2007 to 2016.

Another successful conservation project has also been run in five regions of south Belgium between 2009 and 2014 under a LIFE+ project funded by the European Union. The target species were the Marsh Fritillary, Large Copper and Violet Copper, all of which breed in damp forests and wetlands. Rides and glades have been enlarged and humid grasslands restored or created to increase the area of suitable habitat and the abundance of foodplants. In total, the project helped restore over 600ha of habitat (www.life-papillons.eu). After just three to four years, numbers of the target species have increased strongly and several other threatened butterflies have either colonised or increased, including Pearl-bordered Fritillary, Heath Fritillary, Dark Green Fritillary and Purple-edged Copper. Several rare species of birds have also benefitted as have bats, reptiles and plants.

What of the future?

Butterflies, in common with many other insects, face enormous pressure in the modern landscape. Many species are undoubtedly declining very fast, but we lack good data for many groups of insects. The data we have for butterflies shows serious declines in many countries, but also some major expansions due to climate change. The picture is complicated. But have enough data to know that there is a serious problem with insect declines and that we need to take conservation action as a matter of great urgency. Without insects, it is no exaggeration to say that ecosystems would collapse and the human race would probably be doomed.

Butterflies have given us an invaluable insight into insect declines and taught us crucial lessons, both about the causes of decline and possible solutions. We hope that the publication of this paper, along with others in the special issue, will help provide a sound scientific basis for making good conservation decisions. Our future, and that of butterflies, moths and other wildlife, will depend on the action we take in the coming decades.