Grassland butterflies have declined dramatically between 1990 and 2011. This has been caused by intensifying agriculture and a failure to properly manage grassland ecosystems, according to a report from the European Environment Agency (EEA). 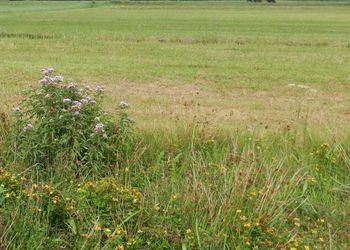 The fall in grassland butterfly numbers is particularly worrying, according to the report, because these butterflies are considered to be representative indicators of trends observed for most other terrestrial insects, which together form around two thirds of the world’s species. This means that butterflies are useful indicators of biodiversity and the general health of ecosystems.
Seventeen butterfly species are examined in 'The European Grassland Butterfly Indicator: 1990–2011’, comprising seven widespread and 10 specialist species. Of the 17 species, eight have declined in Europe, two have remained stable and one increased. For six species the trend is uncertain.

Butterflies examined in the report include the Common Blue (Polyommatus icarus), which has declined significantly, the Orangetip (Anthocharis cardamines), which seems to be stable since 1990, and the Lulworth Skipper (Thymelicus acteon), which shows an uncertain trend over the last two decades.

Hans Bruyninckx, EEA Executive Director, said: “This dramatic decline in grassland butterflies should ring alarm bells – in general Europe’s grassland habitats are shrinking. If we fail to maintain these habitats we could lose many of these species forever. We must recognise the importance of butterflies and other insects – the pollination they carry out is essential for both natural ecosystems and agriculture.”

Why are butterflies disappearing?
Intensifying agriculture and abandoned land are the two main trends affecting the populations of grassland butterflies. Agriculture has intensified where the land is relatively flat and easy to cultivate, and, on the other hand,large areas of grasslands have been abandoned in mountainous and wet regions, mainly in eastern and southern Europe. Both intensification and abandonment result in the loss and degradation of habitat for grassland butterflies.

Farmland is often abandoned for socio-economic reasons. When farming on low-productivity land brings only a small amount of income, and there is little or no support from the Common Agricultural Policy (CAP), farmers give up their enterprises and the land is left unmanaged. The grassland becomes overgrown and is soon replaced by scrub and woodland.

Monitoring Europe’s butterflies
The report is based on the European Grassland Butterfly Indicator, compiled by De Vlinderstichting (Dutch Butterfly Conservation), Butterfly Conservation Europe and Statistics Netherlands, using data from 1990 to 2011. The indicator brings together information from national butterfly monitoring schemes in 19 countries across Europe, most of them European Union Member States. Thousands of trained professional and volunteer recorders count butterflies on approximately 3 500 transects scattered widely across Europe. This volunteer fieldwork is essential for understanding the state and trends of Europe’s butterflies.

While the report is based on data from 1990 to 2011, it should be noted that in many areas of Europe the current changes in land use began before 1990. The report therefore suggests that the recent halving of butterfly numbers may be the most recent development in a much bigger long-term decline.

The EU Biodiversity Strategy recognises the poor conservation status of grasslands. Grasslands should be properly managed, the report states, both within Natura 2000 protected areas and on HNV farmland. A new system of payments under the Common Agricultural Policy could help support better management, the report says.

The European Grassland Butterfly Indicator could be used as a measure of success of agriculture policies. Sustainable funding of butterfly indicators would help validate and reform a range of policies and help achieve the goal of halting the loss of biodiversity by 2020.