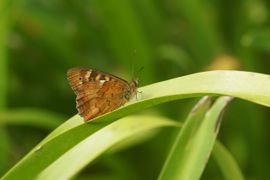 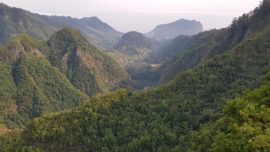 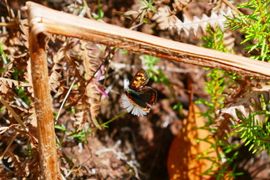 Martin Warren and Martin Wiemers give some thoughts from a recent trip to Madeira by the BC Europe Board and advisers. 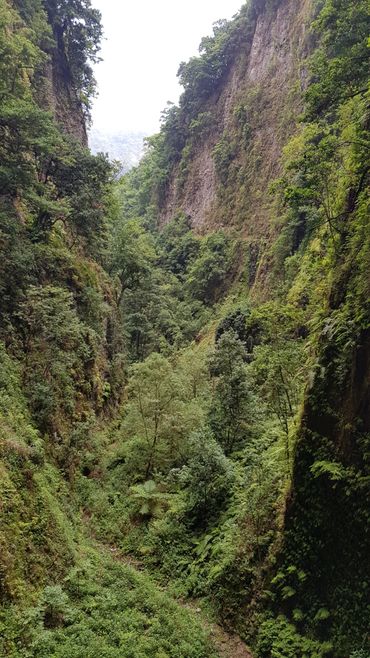 Madeira is an isolated island in the Atlantic that lies 520km west of Morocco and around 400km north of the Canary Islands. The land area is only 740km², making it less than one third the size of Luxembourg. This extreme isolation means that only a few animal species have colonised and only sixteen butterfly species are regularly seen there. However, three of these are endemic to the island and two of them are classed as Endangered in the European Red Data Book: Pararge xiphia (the Madeiran Speckled Wood) and Gonepteryx maderensis (the Madeiran Brimstone). Madeira has the dubious honour of being the place where the only known butterfly extinction has occurred in Europe: Pieris wollastoni (Madeiran Large White) has not been seen since 1986. In October 2018, the BC Europe Board held one of their regular meetings on the island and took the opportunity to assess the local conservation issues and help survey one of these species: P. xiphia, which is continuously brooded on the island. This blog is a short report of that visit.

Apart from ten Board members and BC Europe advisers, we were joined by Sérgio Teixera who is establishing a butterfly monitoring programme on the island, and Hans van Dyck and Thomas Merckx from the Université Catholique de Louvain in Belgium, who are studying Pararge aegeria on mainland Europe. P. aegeria colonised Madeira in around 1967 and has since become abundant and widespread throughout the island. Since that time, P. xiphia has contracted its range, disappearing from lower altitudes and becoming more and more confined to the native Laurel Forest known as Laurisilva Forest. One theory about its contraction is that there may be some disturbance of adults by the invading P. aegeria, but nobody knows how strong the effect has been.

The first thing you notice about Madeira is that it is an extremely rocky place, with steep mountains rising straight from the sea up to 1,862 m. The roads are steep and often precipitous, but new roads have recently been built around the island, running through a system of lengthy tunnels. So travel has certainly got a lot easier. The other thing you notice is that outside of towns, there are few places to walk (and survey butterflies), either because the hills are so steep or because they are covered by dense vegetation. Fortunately, the island has an extensive network of Levadas, which are irrigation channels cut around the mountains, often taking water from the wetter north side to the more inhabited south. These were created from the 17th century onwards and provide easy walking routes. There are 2,500km of them, so there are plenty of opportunities to survey butterflies as well as see the other specialised wildlife.

Another thing you notice on Madeira is that there are a lot of exotic plants growing everywhere, from parks and gardens to roadsides and hillsides. The island has an extremely mild climate with day time temperatures rarely exceeding 25°C and rarely dropping below 15°C. So plants from many countries can and have been grown there. Sadly, the natural vegetation has suffered and the native Laurisilva Forest has been much reduced so that it now mainly occupies steep hillsides on the north side of the island. The loss of Laurisilva Forest is one of the main reasons for the decline of G. maderensis. The native forest has been replaced partly by towns and cultivated terraces at lower altitudes but has also been extensively replanted by non-native Eucalyptus and other trees. The latter are extremely flammable and there have been devastating fires especially in 2010 and 2016. 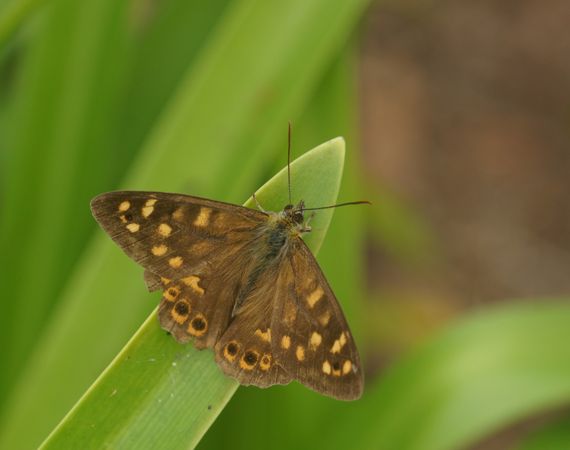 Pararge xiphia: endemic and endangered butterfly of the Madeira island

This butterfly is found in the remaining areas of Laurisilva forest. It might have a subtle competitor, the invasive species Pararge aegeria, a related butterfly that recently colonised Madeira.

During our visit we surveyed many parts of the island, typically walking along one of the Levada routes. We found numerous locations for the Endangered P. xiphia, mainly in the remaining Laurisilva areas in the centre and north of the island. We also found that P. aegeria was more widespread, occurring at almost every location we visited. It was more abundant than P. xiphia apart from a few undisturbed areas of Laurisilva where the latter dominated. We also recorded a few individuals of the Endangered G. maderensis, which does indeed seem to be extremely rare now. The other endemic (but not threatened) butterfly, Hipparchia maderensis (Madeiran Grayling) was at the end of its flight period but we found numerous worn specimens at higher altitudes. Other butterflies recorded were: Danaus plexippus (Monarch) – common in some towns; Pieris rapae (Small White) – widespread; Colias crocea (Clouded Yellow) – abundant; Lampides boeticus (Long-tailed Blue) - occasional; Leptotes pirithous (Lang’s Short-tailed Blue) – occasional; Lycaena phlaeas (Small Copper) – occasional; Vanessa atalanta (Red Admiral) – scattered individuals; Vanessa cardui (Painted Lady) – a few individuals; Issoria lathonia (Queen of Spain) - a few individuals. Several of these species are not native and colonized Madeira only recently, eg Pieris rapae (1974) and Leptotes pirithous (2001). 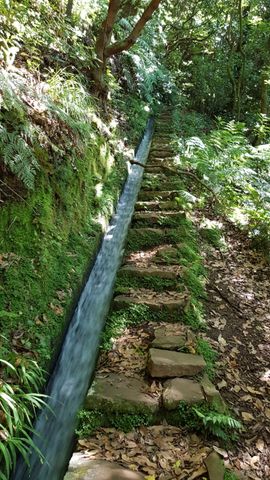 We think that a butterfly monitoring programme on Madeira is vital to investigate population trends of its endemic butterflies and to better understand the influence of invasive species such as Pararge aegeria. Sérgio has already started such a scheme which also includes tourist groups, but this fledgling scheme needs further support. Another positive outcome of the visit is that we decided to start a project to boost numbers of the host plant of G. maderensis, namely Rhamnus glandulosa. This plant has become rare in the wild on the island, with destruction and wildfires, with less than 5000 plants remaining. So it is an obvious and easy conservation measure to take. There are already several projects aimed at reforesting the island after the fires, so it should be possible to include Rhamnus within these programmes.

In conclusion, it was a thoroughly enjoyable and informative trip to Madeira where we learn a great deal about the fragility of island ecology. Hopefully, we made some useful additions to the distributions of some of its rarest butterflies, especially P. xiphia. It is crucial that we continue to monitor populations of this species as well as the Endangered G. maderensis. We will also continue to support Sérgio and his monitoring program as well as taking opportunities to conserve the native habitats on the island.